Olympic athletes are finding unexpected celebrity status during the 2020 Tokyo Games not as gold medalists, but as TikTok stars. Without the strict social media guidelines of the 2016 Rio Games, Olympians are allowed to make more entertaining content.

I, for one, keep forgetting to watch the Olympics. I’m perpetually behind on which teams are competing, what events are taking place on each day, and who’s winning. The pomp of the Olympics is fun, but the time difference and my inability to pay attention to sporting events tend to outweigh the excitement of actually keeping up with the games. Like I’ve done for the past three Olympics, I usually sleep through the events I actually consider watching, and then catch up through clips posted on Instagram and Twitter.

This year, I’m at least familiar with the athletes competing in the Olympics. Athletic exceptionalism got them to Tokyo, but their delightful TikTok content got them to my For You Page. Regardless of their performance at the Olympics, athletes are building a following based on their digital fluency.

Athletic exceptionalism got them to Tokyo, but their delightful TikTok content got them to my For You Page.

Olympics athletes started testing the beds themselves, and went viral on TikTok in the process. Irish gymnast Rhys McClenaghan disproved the “fake news” by aggressively jumping on his cardboard frame.

Maher ended the video with a cheeky, “And for this last take, Nicole and I will be having sex.”

Olympians started gaining TikTok followings when they posted videos of themselves testing out the infamous cardboard beds. 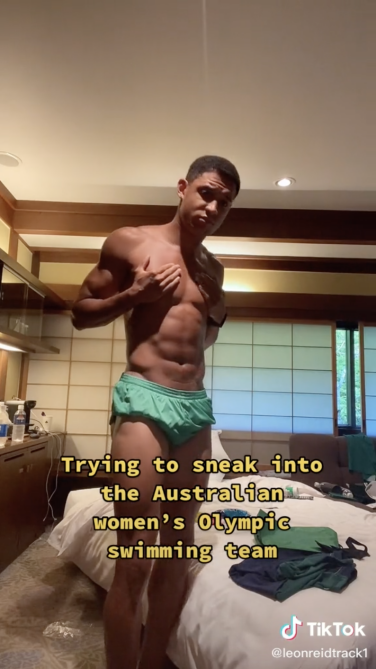 Since the anti-sex cardboard bed rumors, Olympic athletes have dominated TikTok with snippets of their day-to-day lives. The behind-the-scene tours of the Olympic village and clips of mistakes from practice give fans a less idealized view of their lives, but it’s not necessarily new content. Social media brought newfound engagement with the Olympics in 2012. And in 2016, Olympic athletes were divided on whether or not they’d post on Instagram during the competitions.

During the 2016 Rio Olympics, Team USA swimmer Kelsi Worrell and rhythmic gymnast Laura Zeng told USA Today that they thought social media was a distraction, choosing to focus on themselves during the games rather than engage with Instagram and Twitter. WNBA player Elena Delle Donne told USA Today that she planned on “interacting a little bit” to “share some of the experience” with her fans, but posting would be limited because she’d be “pretty busy.”

The International Olympic Committee (IOC) also ruled Olympic social media accounts with an iron fist. Participants, including athletes, coaches, and officials were allowed to post photos from the village and competition venues online, but all audio and video content had to be pre-approved by the IOC. Athletes with non-Olympic sponsors weren’t allowed to post about those sponsorships, either.

By the 2018 Winter Olympics, Instagram stories were the norm and gave athletes the chance to casually engage with their audiences. Participants posted tours of the Olympic village, showed off their gear, and vlogged through the competitions. Ice dancing sibling duo Maia and Alex Shibutani were prolific vloggers, posting makeup routines and outtakes from practice. Their 2018 Olympics vlog, which has since been taken down by YouTube’s stringent copyright policies, was nearly an hour long.

The IOC eased up considerably for the 2020 Tokyo Games, and while Olympians are still forbidden from posting unapproved spon-con, participants are welcome to share noncommercial video content on their personal pages.

Per the guidelines posted by the IOC, “Athletes and others holding accreditation to the Tokyo 2020 Olympic Games are encouraged to share their experiences with their friends, family and supporters via social and digital media and to preserve the memories of their attendance at the Olympic Games.”

Maher, for one, became an overnight TikTok star for thirsting over other “tall foreign demigod lookin athletes.” American swimmer Drew Kibler tried on all his Olympic gear at once with a viral sound about back-to-school outfits in a video with over 1.1 million views, and Puerto Rican basketball player Ali Gibson snuck booze into the otherwise dry Olympic village. Raven Saunders, who refers to herself as The Hulk, may have broken records in shot put and discus throw, but she was the envy of the Tokyo games as one of the few athletes who was assigned a queen size bed on a non-cardboard frame. The Hulk showed off her bed on TikTok.

Meanwhile, 18-year-old American swimmer Tyler Downs isn’t shy about his admiration for gymnast Simone Biles, and posted several TikToks about hoping to run into her. The American women’s swim team parodied a controversial video of an infant swimming lesson by tossing a teammate into the water and repeatedly snapping at her until she floated to the surface. (She notably struggled much less than the infant in the video did.)

It’s not the youngest Olympians taking off on TikTok, but the most TikTok literate. Jesse Smith, the 38-year-old Team USA water polo captain competing in his fifth Olympic games, poked fun at his age in a video viewed over 800,000 times.

“When you check in with security for practice, say your sport (water polo), and they ask if you are a coach,” Smith captioned the video, dancing off beat to a popular slowed version of Stromae’s “Alors on danse.”

What makes Olympic athletes’ TikTok presences so refreshing is the unpolished nature of TikTok itself. Instagram accounts for public figures tend to comprise of sponsored content, professional photos, and long-winded podcast or book announcements. TikTok editing is an art form in itself, but the short-form constraints of the platform prioritizes fun over production quality. The best performing Olympic TikTok content isn’t well-produced, but it is organic.

The decision to even hold the Olympics this year was a divisive one; only 23 percent of Japan is fully vaccinated, and 83 percent of Japanese citizens would rather not host a two-week-long superspreader event. The IOC’s stance on marijuana is regressive; Sha’Carri Richardson’s suspension for using cannabis in a recreationally legal state left a bitter taste in many Americans’ mouths, especially after fellow Team USA athlete Megan Rapinoe started promoting her own CBD line. The entire spectacle of the Olympics is a similarly touchy subject. The sheer cost, carbon footprint, and tons of waste generated by the Olympics has some activists pushing for a permanent Olympics location rather than saddling host cities with building infrastructure they may never use again.

It’s difficult to enjoy the Olympics when the IOC’s double standards and the unfathomable environmental impact of the games overshadows its celebrations. The Olympic athlete’s lighthearted videos are a welcome reprieve. That’s not to say that the athletes don’t play into the IOC’s conservative standards, but they’re less entrenched in the institutional issues of the games.

Olympians are compared to deities for their physical feats, as the original games in ancient Greece were held to honor Zeus himself. Their TikTok presences, however, are a reminder that they’re just like any other young person: painfully online.

When TikTok users expressed their surprise at Olympic athletes being so relevant and involved with online culture, Downs took offense.

“Why did everyone think Olympians weren’t funny like c’mon we aren’t just athletic,” Downs posted. “I swear I’m normal.”

And as someone who’s slept through too many live matches and resorted to keeping up through TikTok, I appreciate it.

US Warns Iran's Next President Time Running Out to Save Nuclear Deal: Report

The 50 best websites to waste your time on

This complete web developer course is on sale for under £10

How secure is your online kingdom?